EDMC in association with DCC has started a Pilot Project of Zero Waste Management Plant for Legacy Waste Biomining at Ghazipur Landfill Site.

Ghazipur Landfill Site is known to accommodate 140 lakh metric tons of waste already, while 1200 MT of waste is disposed to it every day. This huge Garbage mountain in Ghazipur, Delhi has always been an issue for the people and a matter of concern for the government department, mainly EDMC.

With our manufactured Waste Segregation Plant that segregates waste into four different fractions, EDMC has now started a Pilot Project on Ghazipur Landfill to begin Legacy Waste Bio-mining of this huge garbage mountain as there first move towards reducing this huge Landfill.

The inauguration of this Pilot Project to reduce the height of Ghazipur landfill through the Waste Segregation Plant was led by BJP MP Gautam Gambhir on Thursday, 3rd October 2019.

“Thanks to our Chief Guest – BJP MP Gautam Gambhir, and all EDMC officials for sharing their valuable time and efforts in the inauguration of this Project. We hope this pilot project brings positivity amongst everyone, the segregated waste, recyclables, etc can be further disposed of and we can soon work for reducing the landfill height with more plant installations. A big congratulations to each and everyone who made this project successful and running.”, said Saurabh Aggarwal, Proprietor of the Company.

A mountain of garbage spread over 9 acres at the Ghazipur landfill site cannot be finished. Therefore, the work of separating the waste from the segregation machine is being done. This is the first such machine which is separating mudstone construction material and garbage in one go.

The machine has a capacity of segregating 640 MT tons of Legacy waste daily into 4 different fractions which can be further recycled while the manure can be used directly. Since it is a pilot project, if the results turn out to be positive and effective, EDMC might plan for further installation of plants in order to eliminate the Ghazipur Landfill Faster.

Following are the four fractions in which Ghazipur Waste Segregation will take place:-

Here’s the waste segregation process, in brief, the old MSW is first added to the feeder hopper of the Zero Waste Segregation by JCB backhoe loader or excavator. This waste then goes to the primary segregator i.e Ballistic Separator through conveyor belts. The ballistic separator segregates the waste into three fractions i.e one fraction being the Heavy/3d material, the second fraction being the light material while the remaining third fraction goes to the Trommel via conveyor belts. The trommel then segregates the remaining MSW into two fractions i.e Inert material and the soil (good earth manure). 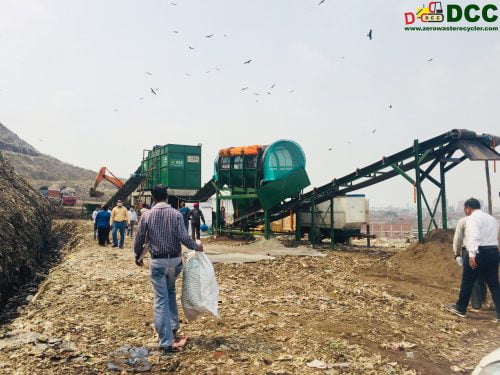 How Ballistic Separator work, how to use in a sorting system