Today’s growing urban local authorities must formulate a comprehensive strategy for the utilization of Land reclamation even after accumulating legacy waste. If statistics are to be believed, approximately 3,000 dumping of solid waste alone in India must be reclaimed or closed until further notice. Non-scientific-built dumpsites cause irrecoverable ecological harm: they produce leachates, emit greenhouse gasses, contaminate groundwater, and so forth.

Land disposal is frequently a threat that needs to be controlled owing to its environmental, ecological, as well as socioeconomic repercussions. As a direct consequence, there’s an immediate need to reclaim existing landfills to preserve land area (referred to as prolonged landfilling) and reprocess untapped potential accumulated at old waste disposal sites.

The Challenges of Legacy Waste & Its Negative Impact on Our Environment

In our metropolitan areas, there seem to be two major barriers to solid waste management:

After generations of being used, such dumpsites have grown in size and heavier, to become serious environmental contributors. Leachate, a noxious dark fluid concentrate produced by waste decaying in all of these landfills, ends up killing greenery in its route and irrevocably contaminates underground water. Trash heaps also contribute to the greenhouse effect, a greenhouse gas that contributes 21 times more to global climate change than carbon dioxide. Methane frequently auto-ignites, starting to cause blazes in open dumps and resulting in significant air pollution.

Is Legacy Waste of Biomining the Perfect Option?

The legacy waste of Biomining will gain significant traction all across the country in the coming decades, fuelled by additional funding from SBM 2.0. After needed experimental studies, the utilization of reclaimed land will emerge as a significant problem for municipal authorities to derive the best functionality.

It is significant to mention, moreover, that bioremediation is now only feasible for Landfill with an increased organic material. Remediation of legacy waste doesn’t always produce effective outcomes in old / aged garbage dumps (un-operated and sealed dump sites) at which waste has indeed surpassed the specified level of bacterial metabolism.

As a direct consequence, the initial stage toward dumping Land reclamation is to evaluate the viability of undertaking bioremediation of waste disposal sites by analyzing performance parameters like the attributes and structure of legacy waste.

Environmental Threats of the Biomining Process

There are multiple significant ecological risks involved with bio-mining developments, therefore a strategy to confront these uncertainties must be kept on hand. The majority of the circumstances introduced at the dumpsite as well as its environments will indeed be detailed to the garbage dump and the maturity level of the waste being lifted.

The potential consequences might primarily be connected with the suitable handling of hazardous waste that could be discovered all through reclamation operational processes, handling the discharges of carbon dioxide and fumes, as well as the affiliated dangers to people’s health, and trying to control any fire, subsidence, or breakdown.

Potential impacts can be successfully controlled if they are recognized in beforehand procedures and acceptable mitigation strategies are crafted by the executing agency.

Bioremediation and Biomining can be used to identify and dispose of legacy waste. First, before a project can start, a total station study or drone surveying of every landfill/dumping site must always be completed. As a result, it is advised to conduct a preliminary investigation into the project’s historical past as well as a waste compositional analysis. Both before and after the bio-mining procedures, environmental variables such as baseline studies of toxic substances in surface and subsurface soil and groundwater, rainfall, soil composition, surface hydrology, topography, wind speed and direction, and so forth will be researched.

After the completion of Biomining, a periodic study will be conducted to look for just any negative impacts in the nearby region.

This translates to the excavation of old dumped waste as well as the formation of windrows of legacy waste to stabilize the waste via bio-remediation, i.e. the access of all waste to air along with the utilization of composting bio-cultures, accompanied by inspection of the stabilized waste in the hopes of recovering all precious assets (such as natural fines, concrete blocks, rocks, polymers, metal alloys, garments, trash, and so forth), guided by ecological sustainability through reprocessing, co-processing, and even construction of roads.

With the availability of land significantly reducing, this land solution will play a significant role in the future. To open up this new industry that offers both a social service and excellent investment benefits, high determination and groundbreaking zeal are required.

Legacy waste and open dumps are now a massive, foul-smelling challenge across the world, especially in India. It is critical to professionalize landfill exploration and production of legacy waste to envision a landfill-free country.

Along with this, Recycled materials and items must be mandated by law in government procurement. It is critical to note that till any parliamentary instrument endorses and encourages legacy waste management business owners, there’s going to be insufficient assurance of their long-term viability.

There is a straightforward and squeezing necessity for collaborative efforts among academic circles, businesses, and government leaders to formulate a sustainable model for handling, managing, and recycling legacy waste management relying on circular economic principles. 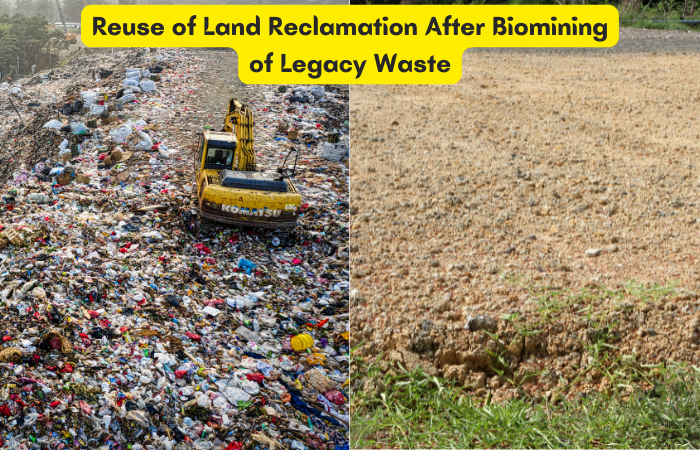 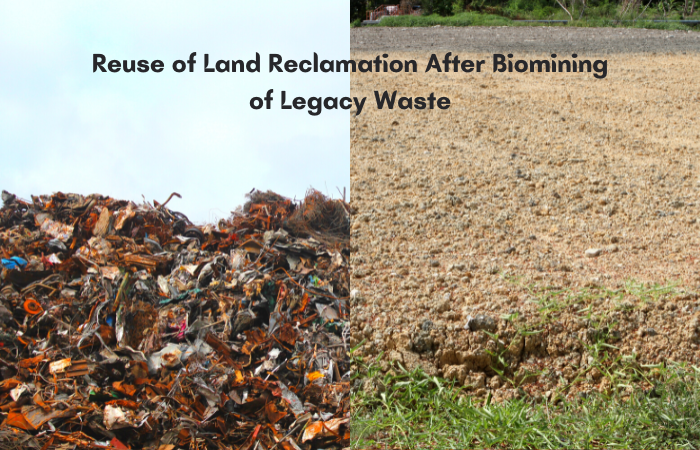 With the never-stopping industrialization, there is a great possibility that soil can easily get contaminated. Fortunately, its remediation can be done using Land Bioremediation methods that are both practical, effective as well as ecologically sound.

Environmental degradation has risen over the last years as a result of intensive urban operations on energy reservoirs, insecure farming techniques, as well as industrial growth. Soil pollution is a critical concern for everyone since it can cause bodily harm to humans, animals, and the planet by consuming food grown in contaminated environments, or it could lead to soil fertility problems and reduced productivity. Toxic contaminants, nuclear industrial waste, pesticide residues, carbon emissions, and hydrocarbons are all examples of toxic elements that pose public health and environmental risks due to their toxic effects. To meet this never-ending issue, bioremediation is the perfect solution for all the good reasons.

Bioremediation refers to the use of biological systems to deteriorate, decompose, modify, and/or remove impurities or value cognitive deficits from both water and soil. Bioremediation is a biological method that utilizes microbes, microorganisms, as well as plants to tweak toxins as they go about their daily lives. Chemical residues can be used as a fuel source by all these organisms’ metabolic activities, offering the pollutants harmless or producing less dangerous compounds in most situations.

In simple terms, Bioremediation is an organic method that utilizes bacteria, microorganisms, and plants to eliminate, minimize, deteriorate, or immobilize environmental contaminants in soils, thereby returning polluted sites to a spotless, low-toxicity ecosystem.

Soil has now been considered a significant asset, and because of its slow creation, it has been assumed as non-renewable. Furthermore, it affects environmental, economic, & community activities. These environment-conscious and cost-effective functionalities are the primary advantages of bioremediation through both mechanical and chemical remediation technologies.

The Most Effective Techniques Used in Bioremediation Process

Bioremediation approaches rely on methods that can be divided into two groups.

As the name suggests, Ex-situ is all about removing pollutants to a secluded recovery destination. This categorization is not widely utilized as it entails the complex job of digging up contaminated soils and transporting them remotely. The fundamental principle of ex situ remediation is to introduce proper soil oxygen, humidity, as well as nutritional requirements offshore. Nevertheless, bioremediation of legacy waste risks extending bacterial growth or causing an unintended splatter during transportation.

There seem to be two strategy classifications that can be used, as discussed below:

This method entails mixing infected soil along with water and some other preservatives in a huge bioreactor to hold the indigenous microorganisms in an encounter with the toxicants.

Solid phase remedy is used to heal soil properties in the above treatment areas. This zone is outfitted with sampling systems that keep residues from attempting to escape the treatment. Humidity, temperature, essential minerals, and oxidant are all monitored to accelerate the rate of deterioration.

The other three similar strategies can be used to accomplish this treatment:

This approach promotes microbial degradation via indigenous microorganisms and allows for the aerobic degradation of contaminants. It is accomplished through a straightforward procedure in which infected soil is uncovered and dispersed above a prepared bed continuously till the contaminants have deteriorated.

This biodegradation methodology is employed to remediate excavated soil heavily polluted with oil and natural gas. Soil biopiles are also referred to as bio-cells. This technology entails piling environmental contaminants and stimulating bacterial growth whether aerobically either by supplying nutrients, mineral resources, or relative humidity.

Compost bioremediation is the process of combining polluted soil with organic matter like grass, hay, or agricultural residues to provide the microbes with a maximum potential of air and water. Composting entails placing polluted soil in recovery containers and mixing it there to provide aeration.

The in-situ technique is determined by the bioremediation process performed at the contamination premises. It is the predominant mode because it necessitates too little physical work to remove spreading pollutants and avert harmful emissions propagating through the commuting or trying to pump away to certain other recovery sites.

For effective biodegradation, each one of these techniques requires that situations be scrutinized and modified on a routine basis. The utilization of land farming and biopiles poses the challenge of monitoring and regulating pollutant volatilization. Ex situ bioremediation strategies, like in situ techniques, are typically less costly than standard approaches and use biological ways. Even so, they may necessitate a large portion of land, and, as with in situ bioremediation, the degradation process is difficult to accomplish and evaporation of volatile substances is a big worry.

If the struggles of bioremediation, especially in situ processes, can also be resolved, bioremediation seems to have the possibility to serve as a low-cost, non-intrusive, proven method of gradually rendering harmful compounds in soil-less hazardous or harmless over time. Presently, studies are being carried out to enhance and overcome the drawbacks that impede crude oil bioremediation with the help of the Biomining process as well.

On a grander scale, much research has been performed and shall continue to be conducted to enhance our knowledge of the principle of microorganisms’ behavior as organisms communicate with multiple hazardous pollutants easily.

Bioremediation is a powerful strategy for cleaning up contaminated land. The concept of bioremediation is not new. Other implementations, on the other hand, are comparatively unknown, and a lot more are surfacing and also being evolved.

Still, the bioremediation procedure is completely organic and has very few negative consequences. Most developments that do not necessitate threatening transit are conducted out in situ. It produces very few toxic materials. Bioremediation is significantly less expensive unlike many treatment technologies since it does not necessitate large amounts of machinery or labour.