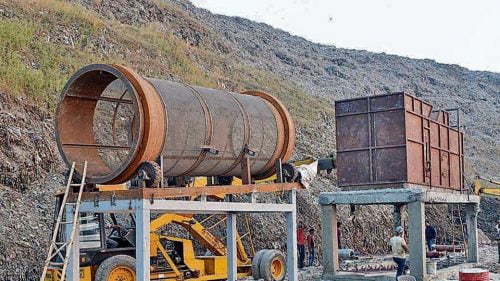 Officials from the East Delhi Municipal Corporation (EDMC) said they have engaged a company which will biomine and bioremediate the garbage — basically first segregating the different components of the waste and then adding enzymes to the organic waste to speed up its decomposition.

EDMC officials say the company claims to have diminished three landfills near Madurai — Srivilliputhur, Bodinayakanur and Sivakasi — through biomining since 2017.

The company set up a trommel of 640 metric tonnes per day capacity at the Ghazipur landfill near Delhi-Meerut Expressway on Thursday. It will start functioning by next week, officials said. In one month, the civic body hopes to segregate and send for processing 15,000-20,000 metric tonnes of legacy garbage from Ghazipur. The landfill has about 14 million metric tonnes of garbage with 2,100 metric tonnes waste being dumped there daily.

“We have taken up this pilot project in compliance with National Green Tribunal (NGT) orders. The machine will help us segregate the waste into different fractions — organic fines, bricks, stones, plastics, metals and cloth rags — and send them for disposal in an eco-friendly manner,” said Dilraj Kaur, commissioner, EDMC.

Kaur said the process will also help EDMC reclaim land at the landfill which is spread across 70 acres and had been declared saturated in 2002.

“If the pilot proves successful, we will install more trommels as we clear space on the site. Also, we will engage more landfill-management companies that come through the joint tender floated by the north corporation. Since it’s a huge landfill, we can have more than one company working on different parts of the garbage mountain,” a senior engineer with EDMC said.

The owner of the company involved, who did not wish to be named, said he has worked on landfills in Punjab, Gujarat and Tamil Nadu, but the advantage in those states was availability of land on the sides to deposit the segregated waste. “The landfills there were surrounded by agricultural lands and fallow areas. In fact, in Tamil Nadu, we gave away the fine soil as compost to the farmers nearby. But in Delhi, this is a challenge. Where do we keep the massive segregated waste?” he said.

Since the corporation’s initial plans to have National Highways Authority of India (NHAI) use up the entire landfill waste in creating embankments at highways did not work out, EDMC is clutching at this option. “Biomining is indeed our last hope,” said Anju Kamal Kant, mayor, EDMC. “If we are successful, it will serve as a model for Bhalswa and Okhla landfills,” said Sandeep Kapoor, EDMC standing committee chairperson.

Senior North Delhi Municipal Corporation officials said at least 10 bids have been received for the joint tender. “This includes companies which worked on the landfills in Ahmedabad and Indore, and whose example was cited as ‘ideal models’ by the NGT for Delhi,” a senior engineer of the north body said.

The north body, on Thursday, approved a proposal to reserve Rs. 75 crore only for this purpose. Its commissioner, Varsha Joshi, said, “Civil work, which is creating platforms for the trommels, has started at Bhalswa landfill.”

The NGT, on July 17, asked the three municipal corporations of Delhi to abandon their plans to cap the landfill by greening them, and instead go for biomining and bioremediation.

One thought on “Waste Segregation Project at Ghazipur Landfill Site”